A few years ago, Koh Rong, Cambodia’s second largest island, was a virtual secret. An unspoiled paradise, news about it spread in whispers, not unlike rumours about the fictional island in Alex Garland’s novel, The Beach. The difference is that the “whispers” about Koh Rong were spread over the internet and not through the lips of a delusional backpacker in Bangkok. Word spreads fast online.

Koh Rong’s secret is out and the ferry service can hardly keep up with demand. It’s just as hard to keep up with the rumours about Koh Rong. Who runs it? How long will it be before “they” spoil it and turn it into a resort for the mega-rich only?

While foreign investors have been snapping up long-term island leases as fast as they can, Koh Rong, arguably Cambodia’s most coveted island, is controlled by a Cambodian company called the Royal Group. Is the Royal Group a shady bunch of corrupt politicians, as the rumour mill suggests? 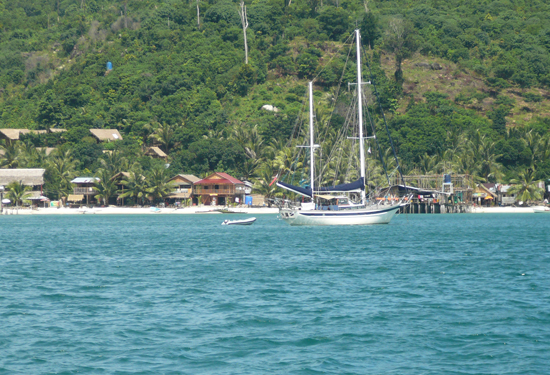 Koh Rong today, but will it look like this tomorrow?

According to their website, the Royal Group is the “premier investment and development company in Cambodia”. This is no idle boast. If you’ve ever been to an ATM in Cambodia, odds are it was an ANZ Royal machine. Operated in partnership with the Australia New Zealand Banking Group, ANZ Royal is one of Cambodia’s largest banks. If you’ve ever been to Phnom Penh and wondered who is behind the (proposed*) construction of Phnom Penh’s largest building, the 36-storey Royal Tower, now you know — it’s the Royal Group. Those are just a couple of examples of this company’s size and influence.

The chairman the Royal Group is Kith Meng, who was raised and educated in Australia. He returned to Cambodia at the start of the UNTAC administration and took the helm at Royal Group when Cambodia was being rebuilt from scratch.

What the Royal Group has planned for Koh Rong is no secret. As the Koh Rong homepage says, the island offers investors a “golden opportunity to be among the first to embrace responsible luxury on Asia’s most beautiful blank canvas”. It goes on to describe a vision of “the world’s premier eco resort island planned from the ground up”.

Is that just media hype? Did the copywriters just throw in “eco” to make the development sound more attractive to investors? If Kith Meng’s involvement in the development of Song Saa Private Island is anything to go by, it’s anything but hype. 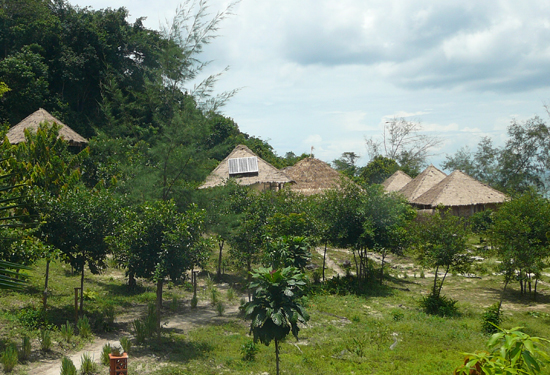 Song Saa is actually two tiny islands about a kilometre off the coast of Koh Rong, called Koh Bong and Koh Oun (“boyfriend and girlfriend islands”). While all credit has to go to Rory and Melitta Hunter for sparing no effort or expense to make Song Saa not just an eco-resort, but a model eco resort, Kith Meng was there to make sure they didn’t cut any corners.

Joe Royle worked as a finishing architect on Song Saa. He related a story to us that should put to rest any doubts about Kith Meng’s intentions. Towards the end of his stint on the island, Joe and a co-worker were sent on a rush trip to the village on Koh Rong where the construction crew lived. The purpose of the trip was to make sure the construction workers’ village was as immaculately clean as Koh Bong and Koh Oun were. If it wasn’t, it could result in revocation of their lease and the end of the Hunters’ dream. 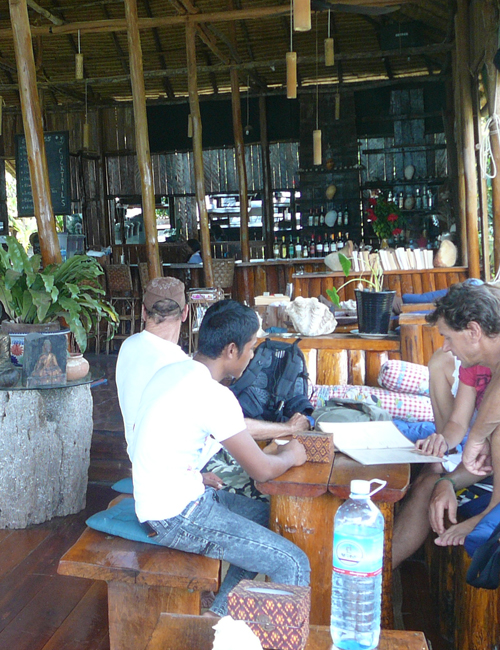 A restaurant on Koh Rong.

While it’s safe to say that the Royal Group isn’t planning on building a tacky resort and dumping all its rubbish and untreated sewerage into the sea, it’s also safe to say that most of us who travel on a backpacker’s budget won’t be staying at their development. However, all is not necessarily lost — at least not yet. Stage one of their master plan focuses on the southeastern corner of the island. The current ferry landing and most of the existing bungalow establishments on the island are just outside of its perimeter. Existing leases, which are administered by village officials, are relatively short term and Kith Meng has the power to revoke the leases on a month’s notice, but if nothing goes wrong, there are probably up to five years or more of breathing space before it will be time to look for another affordable island paradise.

What could go wrong? Plenty.

Sometime around the middle of 2012, a group of island residents who have grandfather rights to land on Koh Rong complained to Kith Meng that it was unfair that the administrator of Phum Koh Tuit village was allowed to log the island forests while they were not. Reportedly, this was the first Kith Meng had heard about the logging. Outraged, he paid a personal visit to the island. According to a Cambodian translator who happened to be there at the time, Kith Meng removed the man from his post and had him arrested.

Of course, the timber used to build all the bungalows and restaurants that have popped up on Koh Rong in the past few years had to have come from somewhere. Koh Rong is a big island and arguably, small scale island logging can be accomplished with minimal environmental impact. However, at last count, there were about a dozen guesthouses on the island and more are in the planning stages. The problem is, they aren’t being planned with the Royal Group’s consent, oversight or approval; nor are they always undertaken in a spirit of cooperation between foreign leaseholders or with the island’s ecological welfare uppermost in mind. 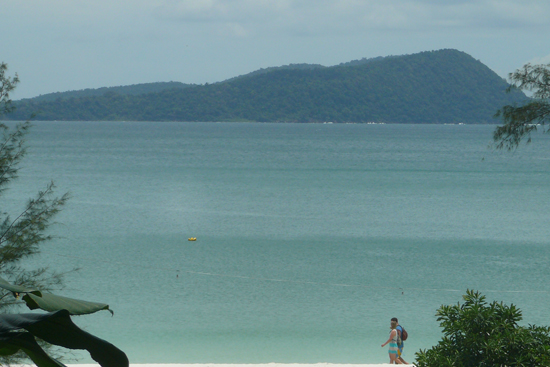 Scratch beneath the tranquil surface of life on Koh Rong and you have a more dramatic story than the one played by Leonardo DiCaprio and the rest of the cast in the movie version of The Beach. Who was behind the destruction of one restaurateur’s pizza oven? Was that death threat just uttered in a moment of drunken anger or will at least one barang leaseholder go to whatever lengths it takes to keep the competition at bay?

Then there was the case of a Sihanoukville bar-room boast. On a high after securing a lease from a Koh Rong official, the proud proprietor of a soon-to-be-built-if-all-goes-according-to-plan guesthouse boasted that he had also gotten a great deal on local timber. The question of whether or not it was going to be old growth or clear cut timber didn’t even cross his mind; much less if the logging was legal.

Stories like these don’t inspire confidence in those of us who would like to believe Koh Kong will be as near-pristine next year as it is this year. One way or another, development is taking place. The question is: How is it going to be developed?

Koh Rong is just a couple of hours by ferry from Sihanoukville and Sihanoukville is arguably the rumour capital of Southeast Asia. It’s always hard to separate fact from fiction in this corner of Cambodia. However, this much is certain: Koh Rong is still a stunning island that could be the highlight of your trip to Cambodia. How long it will stay this way is another question, though. If you want to experience it as it is, do so sooner rather than later.

* Construction of the Royal Tower is yet to commence. Apols for not making that clear & thanks to Matthew for pointing out that most visitors to Phnom Penh would not be aware of a building that hadn’t commenced construction yet 🙂 The ATMS are everywhere though!